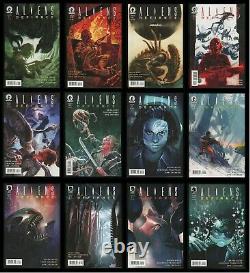 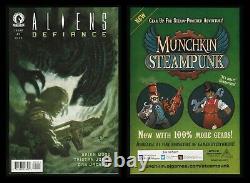 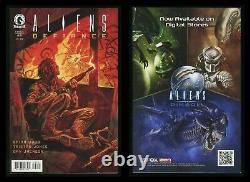 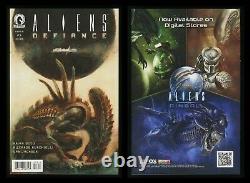 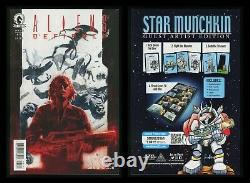 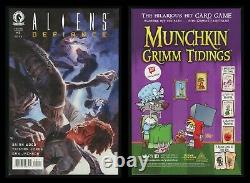 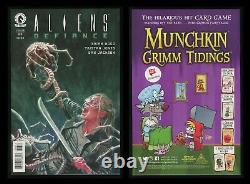 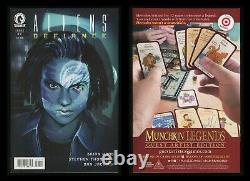 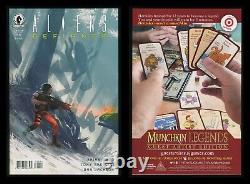 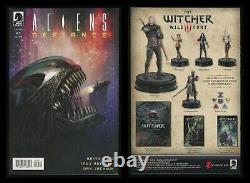 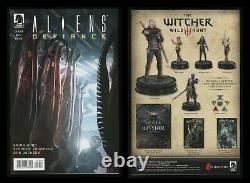 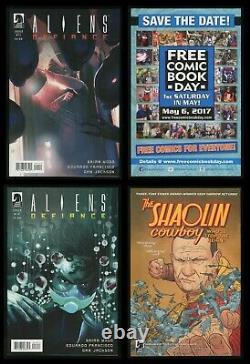 Rising from the darkness, the horror of Aliens continues in the comics world. The comic mini-series, set between Alien and Aliens, tells the story of Private Zula Hendricks, a rookie Colonial Marine who goes A. To defend Earth from the Xenomorphs.

She is aided by Davis One, a Weyland-Yutani synthetic who has broken his programming and developed his own personal mission to stop the company from acquiring the creatures for research. In issue #1, "Derelict", Battling demons from her past while fighting for her life, Colonial Marine Private First Class Zula Hendricks, in the company of Weyland-Yutani synthetics, is forced to question her strength and loyalty when the discovery of an insidious alien species on a derelict hauler sends her on a dangerous journey across the stars.

Next in issue #2, "Kinetic", Colonial Marine Hendricks and the Weyland-Yutani synthetic Davis break protocol, navigating the Europa to a distant science station discovered in the once-derelict ships data recordsa station that recently went dark. Following the trail of the alien species, they dive deeper into a conspiracy, uncovering just how much is riding on their choices.

Next in issue #3, "Mutiny", Mutiny aboard the Europa. Colonial Marine Zula Hendricks and Davis 01 must survive an organized tactical assault in deep space. Next in issue #4, "Casualties".

Colonial Marine Private Zula Hendricks is AWOL deep in space along with the combat synthetic Davis 01, chasing the trail of the xenomorph threat. But in the eerie quiet of a space graveyard the ghosts of her past are catching up with her, and Weyland-Yutani isnt far behind. "Siege", Zula Hendricks and Davis are about to take on the xenomorph threat as well as a squad of hardened Colonial Marines intent on capturing a specimen in a large midspace fueling station.

How far is Zula willing to go to stop her fellow combatants? Next in issue #6, "Incubation", When Zula and Daviss plan to deny the Colonial Marines a xenomorph sample hits a snag, their only remaining course of action may be something they can never come back from. Next in issue #7, "Excision", In the aftermath of the intense battle against the Colonial Marines, Zula Hendricks and Davis have gone from being merely AWOL to full-blown traitors. As they drift into a quiet part of space to recover and regroup, new crew member Dr. Hollis discovers something in the medical bay that changes everything.

Sometimes evil comes from within. Next in issue #8, "Environmental", Keeping a baby xenomorph alive, even in a frozen state, contradicts all the survival instincts that Zula and Hollis have. But by studying the alien in cryostasis, Davis believes he can discover how to exterminate it and the rest of its forsaken, vile race permanently. Is he dooming the mission in the name of science?

Next in issue #9, "Invasion", A fledgling alien, kept alive in a deep freeze for the purpose of learning its weaknesses, wages a psychological war on Zula, Davis, and Hollis. They try to keep it together, but an attack on the Europa by space pirates forces the trio to weaponize what they seek to destroy. They now must return to Earth, where the Weyland-Yutani corporation is waiting and ready to put an end to their rogue mission.

Next in issue #11, "Splashdown", The mangled Europa is in a state of free fall in Earths atmosphere with Zula, Davis, Hollis, and a previously frozen xenomorph onboard. Davis battles the alien threat while Hollis and Zula scramble to the escape hatch. Impact is unavoidable; survival is doubtful. Finally in issue #12, "Reentry", After her return to Earth, Zula Hendricks fully expects to answer for her defiance. But instead of military tribunals, what she experiences is a chilling look into the future of warfare, courtesy of Weyland-Yutanis R&D labs.