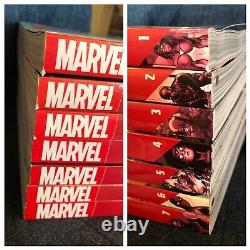 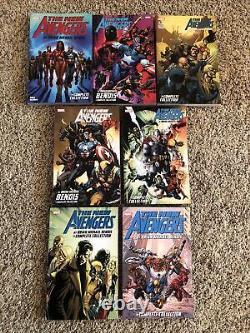 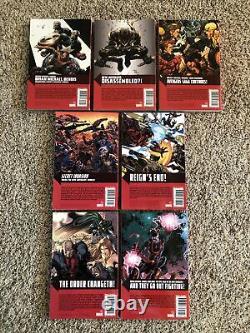 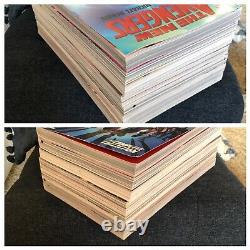 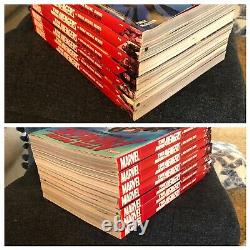 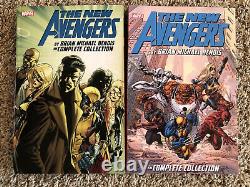 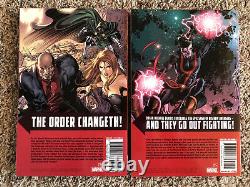 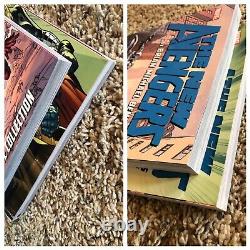 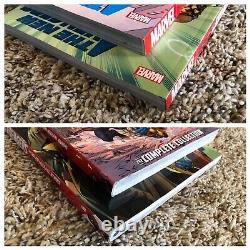 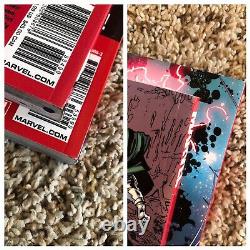 Vol 6 is in good. Small ding on back right near spine (see pic).

But before he can build his New Avengers, he must disassemble the old ones! In the team's darkest day, one of their own tears them apart - seemingly forever! But when Electro triggers a breakout at super-villain prison the Raft, Captain America and Iron Man find themselves fighting alongside a new, and very different, group of allies.

Spider-Man, Wolverine, Luke Cage and Spider-Woman join the new order as the Avengers are reborn! But will the mysterious Sentry add the power of a million exploding suns to the lineup? First he needs to figure out who he is!

One glorious era ends, and another age of greatness begins! Softcover, 504 pages, full color. Volume 2 - 1st printing. David Finch, FRANK CHO, STEVE MCNIVEN, MIKE DEODATO, HOWARD CHAYKIN, LEINIL FRANCIS YU , OLIVIER COIPEL, ADI GRANOV, JIM CHEUNG, RICK MAYS, MIKE MAYHEW, and Alex Maleev. As Brian Michael Bendis' New Avengers roster is completed, who is the masked Ronin - and why has Captain America recruited this mysterious figure? In the wake of the tumultuous events of HOUSE OF M, a new threat emerges that may be impossible to stop. Canada's premier super-team finds that out the hard way - will the Avengers fare any better? And when CIVIL WAR breaks out across the Marvel Universe, Iron Man and Captain America will find themselves on opposite sides - and their team will be torn in two! Whose side is Spider-Woman on? Luke Cage marries Jessica Jones! And the Illuminati's introduction!

The hunt is on for Luke Cage, Spider-Man, Wolverine, Spider-Woman, Doctor Strange, Iron Fist - and someone taking on the mantle of Ronin! But when the rebel team finds a huge clue to the threat that has faced them since the day they banded together, will the truth destroy them from within? Or will that honor go to the Hood and his army of super villains?

Once they were Earth's Mightiest Heroes. Now, the Avengers live in the shadows, wanted and hunted by the law, a law whose name is Norman Osborn. Softcover, 480 pages, full color. Volume 5 - 1st printing. Jim Cheung, Marko Djurdjevic, WADE VON GRAWBADGER, DANIEL ACUÑA, MIKE McKONE, MIKE MAYHEW, BRYAN HITCH, STUART IMMONEN, JACKSON GUICE, ANDREW CURRIE and KARL STORY, and Joe Quesada. Norman Osborn's Dark Reign goes from bad to worse when one of the Hood's gang learns how to shut down the Avengers' powers! Thor and the Dark Avengers lend a hand against the Frost Giant Ymir! Earth's new Sorcerer Supreme has a lot to learn! Ronin takes drastic action in an assassination attempt on Osborn!

And Steve Rogers makes his triumphant return - but when gods fall, is he too late to save the day? Asgard is under siege as the end of an era arrives!

Where will they call home? And which Dark Avenger is sticking around for the ride? The latest roster has come together to take on the perils too dangerous and bizarre for any other heroes - beginning with an interdimensional demonic threat to all existence! Then, a deep and deadly secret Nick Fury has kept buried for decades comes back to haunt the team - but who were their predecessors in the 1950s?

And when the madness of FEAR ITSELF hits home, the New Avengers battle alongside the Avengers, super-hero nanny Squirrel Girl fights alone and the status quo gets shaken up once again. The time has finally come for Daredevil: Avenger!

First, the return of Norman Osborn pits the team against an even deadlier and more dangerous team of Dark Avengers! But even that can't prepare them for a world-rocking war with the X-Men! Will Luke Cage join the battle, or choose to stay with his wife and child? As the situation goes from bad to worse, Iron Fist must seek the secrets of the Phoenix!

Three of Earth's Mightiest will be taken captive, but no jail can hold them for long - or can it? And when all looks dark, can the Illuminati succeed where the Avengers failed? Anyone who gets out alive will face an era-ending mystical force too big for even Doctor Strange to handle! Softcover, 440 pages, full color.