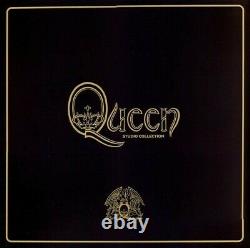 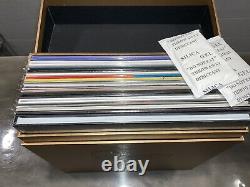 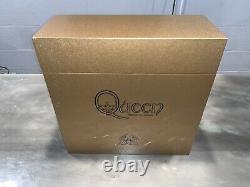 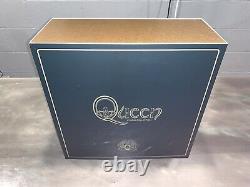 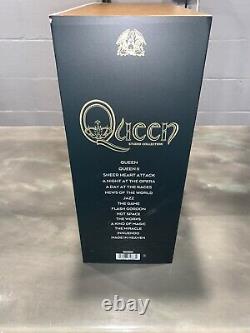 Brian May , and company in the finest fidelity it's ever enjoyed. Sourced from the original master tapes, mastered by Bob Ludwig, cut at half-speed at Abbey Road Studios, and pressed at Optimal in Germany, this mammoth collection will rock you again and again. Custom-produced colored vinyl (different for each record), an eye-popping. 108-page hardback book , and flip-tip box. There's more information on the mastering and cutting below, but right now, secure your copy of this today.

And prepare to go stone cold crazy like never before. This is how listeners first heard the now legendary Queen in the 1970's when vinyl was the predominant format for recorded music. As a matter of principle, every Queen studio album was offered at the time of original release on vinyl, even well into the era when CDs had taken over as the medium of choice for most of the public.

However, the final two albums. Were actually formatted primarily with the CD in mind, with a longer running time, so the contents had to be edited down to fit them on to the two sides of a vinyl album. Now, specially for this edition, for the first time, these two albums have been cut at full length as double vinyl LP's - four sides each making up a vinyl set that is complete in every way.

The box set offers many other special features. Most noticeable is the colored vinyl: designed for collectors, each album is afforded a different color, in keeping with its original artwork, giving a unique record-deck experience.

The color discs are custom-produced especially for this set, using new material technology which ensures optimal sound quality. Originally never had a designated A side' or B side' - but Side White' and Side Black'. For this new edition, the album has been cut on two separate discs, black and white, each with a custom etching on the reverse side, a nice bonus for collectors. The collection has been five years in the making. Queen's production team has worked extensively on all stages of this painstaking mastering process.

The first step was the tape research: Locating and confirming the correct versions and best sources for all tracks. Most notably, "Under Pressure, " plus five tracks on the. Album, were improved hugely after the discovery of better sources during this period. Particular attention was paid to the original releases to ensure that nothing was lost or changed for the worse by reverting to earlier sources. To ensure optimum quality in mastering the music, the Queen team asked a number of world-renowned mastering engineers to deliver their best efforts on the same three songs.

Bob Ludwig's work was a clear winner. He is probably the best-known mastering engineer in the world. His skills, combined with a perfect acoustic environment and the some of the world's finest analogue and digital equipment at. In Portland, OR, allow him to produce matchless quality in the final result. The original plan was to master everything straight from the analogue mix tapes, where available.

But in fact most of those tapes, having suffered from the effects of time, were in need of some restoration. Problems included speed errors, missing audio, newly developing clicks and other unwanted noise. Hence, the decision was made to create new super-high quality digital masters, using 24 bit samples and a sampling rate of 96 kHz. All the restoration was then performed in the digital domain, and the vinyl was cut from these perfected files.

All restoration was carried out with the lightest of touches, with a profound respect for the originals, and the resulting masters are undoubtedly the finest ever. Of course, with the vinyl process, everything depends on the final stage the physical cut. For this process, there was only one man in the frame.

Miles Showell at famed Abbey Road Studios , London, has perfected the technique of cutting at half speed. Showell runs the source file and the cutting lathe at 50% of the normal speed, which means double the accuracy in the cutting of the groove, resulting in superior reproduction of the music via the stylus in your record player.

Showell started by cutting the albums onto acetate discs to check the process for every track, and only after he'd fixed any sibilance or other vinyl-specific problems did he cut the lacquers to be sent to the manufacturing plant, Optimal in Germany. Has an enviable reputation for audiophile-quality pressings, plus unparalleled capability for the printing and manufacture of all the elements to be contained in the box set. The Queen team worked closely with the technicians at Optimal in an exhaustive quality-control program where test-pressings of every disc, in black and colored vinyl, were checked to minimize unwanted noise. Finally, the finished results were compared with original pressings of the LPs to answer the question: Was it all worth it? " True to the final words of the song: "Yes, it was a worthwhile experience!!! The 18 vinyl LP box set also comes with a lavishly illustrated 12 x 12 inch 108 page hardback book which features introductions to each album, quotes from Queen themselves, hand-written lyrics, rare photographs, memorabilia, and information on singles and videos - all made possible with unlimited access to Queen's own archive plus the personal archives of Brian May, Roger Taylor and some generous fans. Features: Special colored 180g 18LP box set Featuring all 15 hit studio albums sourced from the original master tapes Mastered by Bob Ludwig Half-speed lacquers cut at Abbey Road Studios Manufactured at Optimal in Germany Queen II cut on double LP, each with a custom etching on the reverse side Innuendo & Made In Heaven cut as full length double vinyl LPs for the first time Includes lavishly illustrated 12 x 12 108-page hardbook book with intros to each album, quotes from Queen themselves, hand-written lyrics, rare photographs, memorabilia & information on singles and videos Housed in flip-top box with slip-case protective cover. Modern Times Rock'N Roll. LP2-3 - Queen II (1974) (2LP). White Queen (As It Began). The Loser in The End. The Fairy Feller's Master-Stroke. The March of the Black Queen. LP4 - Sheer Heart Attack (1974).

Good Old Fashioned Lover Boy. Teo Torriatte (Let Us Cling Together). LP7 - News Of the World (1977). If You Can't Beat Them.

The Ring (Hypnotic Seduction of Dale). In the Death Cell (Love Theme Reprise).

I Want To Break Free. Keep Passing the Open Windows.

I Was Born To Love You. Too Much Love Will Kill You. You Don't Fool Me. It's A Beautiful Day (reprise). The item "NEWithSEALED QUEEN The Studio Collection (180g Colored 18 LP Box Complete Set)" is in sale since Wednesday, May 19, 2021. This item is in the category "Music\Vinyl Records". The seller is "evets8" and is located in Washington, Pennsylvania. This item can be shipped to United States.