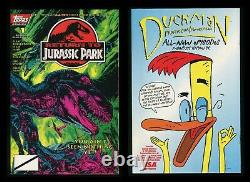 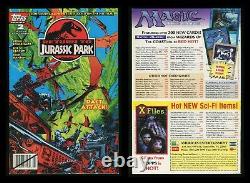 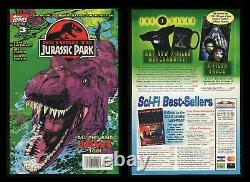 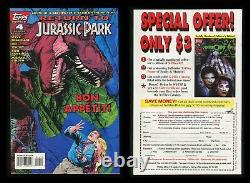 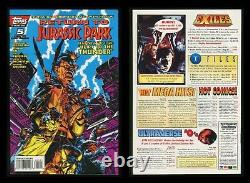 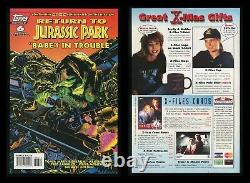 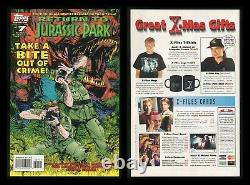 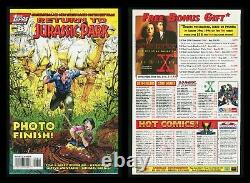 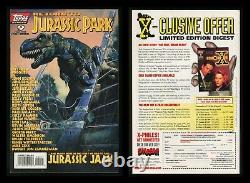 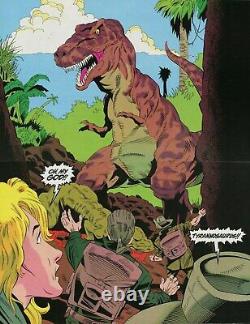 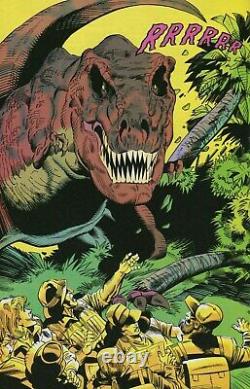 An All-New comic series based on the Hit Film Jurassic Park! Jurassic Park is an American film series which also consists of novels, comics, and video games of people on a series of disastrous attempts to create a theme park of cloned dinosaurs. Michael Crichton's novel, "Jurassic Park ", was brought to life in 1993 with Universal Studios film adaptation.

Jurassic Park scientists manage to clone dinosaur DNA found in amber, reproducing dinosaurs in the modern day. Then they make Jurassic Park an island where tourists could view dinosaurs in their native habitat, but the dinosaurs escaped, turning a theme park into a horror show. This series continues the story as Alan Grant and Ellie Sattler hear of reports of strange activities on Isla Nubar luring them back to the deadly dinosaur populated island. Return to Jurassic Park (1995 - 1996) Full Run includes.

Return to Jurassic Park #1 - April 1995. Art by Joe Staton w/ Rich Rankin & Renee Witterstaetter. Alan Grant, Ellie Sattler, and Robert Muldoon have been joined by Edgar Prather, the right hand man of their employer, John Hammond - in an effort to infiltrate Jurassic Park. After the disaster chronicled in the movie, the U. Army supposedly had taken charge, and now, Hammond can't get onto his own island. He sends his four-person team in covertly, where they soon discover that the walls which used to hold the dinosaurs in check have been removed; no part of Isla Nubar. Moreover, the Army seems to be conducting experiments with something that appears as green flame. But the biggest shock comes when the foursome discovers that another team has also infiltrated the island - a teram from John Hammond's corporate enemy, Biosyn!

Alan Grant, Ellie Sattler, Robert Muldoon and Edgar Prather of the InGen Corporation, and Sonya Durant and Raul Lopez of InGen's competitor, Biosyn - are making their way on foot across the island where Jurassic Park once stood. The island's become a top-secret Army test site for something called the "Green Flame, " defended by the military and the remaining dinosaurs, which have been set loose to discourage such excursions. The six humans have hade several run-ins with the reptils, which resulted in stand-offs, and one run-in with the soldiers, which some suspect are renegades. It's true that the soldiers were planning to shoot the intruders under cover of "national security" but the whole thing's gone way way too far for Grant and Ellie.. Features text article w/ pictures entitled, "Jurassic Park & Dino Cinema - In search of scientific accuracy Part 2" by Gary Gerani.

Return to Jurassic Park #3 - June 1995. Surviving the dangers of dinosaurs and men, Alan Grant, Ellie Sattler, Robert Muldoon, Sonya Durant, Raul Lopez, and Edgar Prather have reached their goal: the secret base hidden in the heart of a suddenly-restricted Jurassic Park. Sonya and Edgar go to scout around, and so are gone when the remaining four are captured by scouts. There's no question that these guys plan to kill anyone entering this territory - the question is, can Alan and Ellie, Robert and Raul, stay alive until Sonya and Edgar attempt a daring rescue... Return to Jurassic Park #4 - July 1995. Art by Joe Staton w/ Steve Montano.

Sonya and Edgar, trying to keep a safe distance between them and the. Tyrannosaurus Rex, eventually make it back to free. Alan, Ellie, Robert and Raul.

To escape, they flee back into the jungle and run right into the T. The group scatters hoping to confuse and escape from the T. But unknowingly, Edgar has a secret deadly agenda making him more dangerous than the T.

Art by Armando Gil w/ Fred Carillo, Steve Montano & Renee Witterstaetter. "Heirs to the Thunder - Part 1". Two researchers on the island of Jurassic Park, Derek and Abby, have the unlucky distinction to be around the day the big storm hits. But, because of Abby's curious nature, she and Derek aren't around when Grant and Ellie make their appearance on the soon-to-be- chaotic island. Instead, the two researchers were trying to uncover the strange secret project on one Dr.

As the island is being evacuated and nobody has any idea where Derek and Abby are... Soon after having survived the attempt on their lives by the insane scientist, Dr. Gustavus, who was intent on speeding up the evolution on the newly - reintroduced dinosaurs.

After the chaos dies down on the storm-ravaged island, Dr. Gustavus is killed by his own greed, and Derek and Abby are rescued from their dangling hold alongside a sheer cliff. Return to Jurassic Park #7 - November 1995.

"Photo Finish - Part 1". After being rescued, Derek and Abby find themselves flying into a whole new mess of trouble. The Army moves in to set everything right. But the question is, which soldiers will follow their directives to keep mouths shut about the wonders they are seeing, and which ones will not.

Derek and Abby are about to find out... But the price might be higher than either is willing to pay.

Later, Abby and Derek report two unruly soldiers that are trying to take advantage of their unusual assignment by smuggling out dino pictures to a hungry tabloid press. But when the undeveloped rolls of film are found in Abby's room, its Abby that finds herself in a whole mess of trouble, no thanks to those two "honest" pilots.

And if abby expected Derrick to back her up, forget it! He just wants to keep his job, and says so!

An Army General decides that Abby is to, Pack your bags. You're off the island forever. She sees her chance, throws the bag into the jungle growth of Jurassic Park, thus forcing the pilots to land and look for their "bank roll". What they find is Abby's foot in their stomachs!

Abby then makes for the dorm in search of Derrick. Back at the dorm, a guilt-ridden Derrick so finds himself confronted by one very angry former friend who is demanding his help..

Return to Jurassic Park #8 - January 1996. "Photo Finish - Part 2". Abby and Derek escape into the jungle determined to clear up Abby's good name. That jungle if full of people eating dinosaurs and "shoot to kill" soldiers.

Is a cleared name worth more than staying alive? Return to Jurassic Park #9 - February 1996. Written by Keith Griffen & Dwight Jon Zimmerman. Art by - Every page features a different artist. The events in this story take place before the parks official inspection as per the movie, Jurassic Park.

Problems abound in Jurassic Park as preperation is under way for the arrival of. Alan Grant and paleobotanist Dr.

Multiple containment fence failures allow some of the dinosaurs to escape their paddocks... And Dennis Nedry, the computer systems specialist, is nowhere to be found. Events then take a bloody turn as the Tyrannosaurus Rex escapes unleashing a hunger that has waited millions of years... To sink teeth into flesh, rip, shred, and taste warm blood once more.

Muldoon has his hands full as he comes face to face with the Tyrannosaurus Rex. And to add more confusion into the mix. Unexpectedly shows up demanding to know what happened.

An ominous start to the great theme park. An island where tourists could safely view dinosaurs in their native habitat.

This item is in the category "Collectibles\Comic Books & Memorabilia\Comics\Comics & Graphic Novels". The seller is "collectible_entertainment" and is located in Palm Bay, Florida. This item can be shipped worldwide.